timeless and versatile home accessories, lighting, and accent furniture. The new products will debut at the January 2015 markets.

With BAK Home, Kushnick offers IMAX customers a luxe look at an accessible price. The line consists of richly detailed pieces, all designed to work in a variety of home environments—from traditional to modern, and everywhere in between.

As a set decorator, Kushnick is known for a consistent eye and expert curation; her credits also include celebrity interiors and perhaps most notably, her ongoing role as
set decorator for the hit CBS drama The Good Wife, now in its sixth season. As Kushnick notes, “The BAK Home collection is aspirational yet completely attainable, and inspired very much by my role as a set decorator. I’m always on the lookout for classic pieces that work in a variety of spaces. At the same time, I’ve been fortunate enough to amass a great fan following through my work, and I have listened very carefully to what they are looking for. BAK Home is a culmination of all of this; the collection provides shoppers with pieces that complement an array of personalities and styles.”

Rex Yoakley, Vice President of Sales for IMAX, is certain about the success of the newly formed partnership. “We are extremely excited about our latest collaboration – Beth Kushnick has redefined the role of the set decorator throughout her career. We’re so pleased to bring her talents and experience to the IMAX family.”

“As a Set Decorator, I am a storyteller. I transform blank slates into authentic spaces that can reveal an entire life in seconds, full of unspoken details. Using color, furniture, fabric, art, lighting and accessories, my job is to compose settings that both capture and enhance any story.”

For almost 30 years, Beth Kushnick has created character-driven settings for some of the most recognizable feature films and television series, including her current work as set decorator on the hit CBS drama The Good Wife.

Bringing the world of The Good Wife to life is the latest milestone in a career that’s as diverse as Kushnick’s designs, spanning dramatic films such as Reversal of Fortune to the sci-fi world of TV’s Fringe. Kushnick’s feature film credits include Hide and Seek, Rounders, Mortal Thoughts and Private Parts, and she has set decorated the East Coast units of The Insider, Jumanji, Frequency, Wanted and National Treasure. Her television work includes Kings, Trial By Jury, and Conviction. She was the set decorator for The Metropolitan Museum of Art’s lauded Costume Collection exhibition, The Model As Muse.

Additionally, Kushnick’s presence as a celebrity curator for the startup OpenSky.com garnered her over 138,000 followers. Her popular Twitter account, @goodwifesetdec, has over 5600 followers and is the first for a set decorator on any network series.

Kushnick’s approachable yet sophisticated style resonates deeply with audiences. Throughout her career, she has sought opportunities to step out from behind the velvet rope to engage her passionate and loyal television, film, and design fans. By collaborating with CBS Consumer Products, Beth was responsible for creating the first home décor license in prime time television history. Her work with Mitchel Gold + Bob Williams and Madura has broken new ground and now Beth brings her own label, BAK Home, to IMAX. 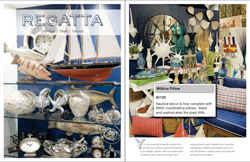 Rep of the Month: Barb Petersen of KRYSAN and Associates

You Must Stay Alert